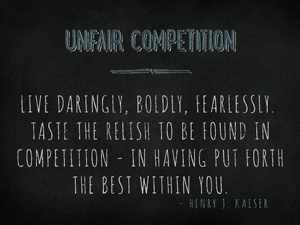 It is basic public policy that free competition drives our economy.  It follows that the “imitation” and “copying” of creative ideas and concepts is a very important part of a free market’s success.  Once ideas, concepts and inventions are in the public domain, they may be freely copied with limited exceptions.  When a creative idea, business concept, corporate symbol or other invention is not protected by any form of intellectual property, it is in the “public domain”

For example, a second market entrant imitating the first (or the innovator) and offering a similar product or service at a lower price and/or with better quality is encouraged—and in fact, is essential in a competitive economy.  The burden to prove trademark infringement is on the party attempting to exclude another from use of a particular trademark, patent or copyright.  Unless a plaintiff can establish that the defendant infringed on its trademark, the law will tolerate a competitor’s copying.  Streetwise Maps, Inc. v. Van Dam, Inc., 159 F.3d 739, 741, 48 U.S.P.Q.2d 1503 (2nd Cir. 1998).

What is Trademark Unfair Competition?

Trademark unfair competition is a business tort.  Unfair competition is difficult to define specifically, but it has become an umbrella for a wide range of distinct business injuries, including trademark infringement, deceptive business practices, consumer fraud, and trade secret infringement, among others.  It is clear that no inflexible law can be used to define what constitutes unfair competition.  “It would be impossible to draft in advance detailed plans and specifications of all acts and conduct to be prohibited, … since unfair or fraudulent business practices may run the gamut of human ingenuity and chicanery.”  People ex rel. Mosk v. National Research Co. of Cal., 201 Cal. App. 2d 765, 772, 20 Cal. Rptr. 516, 133 U.S.P.Q. 413 (3d Dist. 1962).

Trademark unfair competition relief derived from trademark infringement and false advertising if the parties were direct competitors.  The modern view is that a trademark can be infringed by a non-competitor using non-competitive goods or services if there was a likelihood of confusion over sponsorship, affiliation, or connection.  Some states, including New York, require additional evidence of “bad faith” to prove trademark unfair competition.

Business conduct (also called bad faith) can often be aggressive—and even distasteful—without constituting unfair competition.  “The lack of business ethics displayed by the defendant … invites and receives the condemnation of all who love fair play and scorn chicanery and deceit.  Courts cannot correct all unfair practices brought to their attention any more than legislation can correct all social maladjustments.”  Philadelphia Dairy Products v. Quaker City Ice Cream Co., 306 Pa. 164, 159 A. 3, 6, 84 A.L.R. 466 (1932).

Trademark unfair competition is a rapidly evolving body of law and the federal and state courts have autfedority to define what trademark unfair competition is.  So aside from unfair competition categorized and named—trademark infringement, false advertising, misappropriation, etc.—judges have equitable power and discretion to create remedies depending on the situation.  However, this discretion is not limitless.  The creation of new legal dimensions for unfair competition must come from prior legal precedent and legislative policy.  As the Third Circuit stated, “preventing deception of the public is itself in the public interest.  The public interest is not something the courts and judges can know by feeling the vibrations from the cosmos.  Rather, it is reflected in the law of some appropriate sovereignty.”  SK & F, Co. v. Premo Pharmaceutical Laboratories, Inc., 625 F.2d 1055, 1067, 206 U.S.P.Q. 964, 1980-2 Trade Cas. (CCH) ¶ 63361 (3d Cir. 1980).

After some uncertainty as to whether or not state-by-state unfair competition laws were appropriately protecting against the confusing use of distinctive marks, the Federal Lanham Act (§ 43(a)) has become the most common protection against infringement of trademarks, both registered and unregistered.  Federal law and federal courts are now the primary source of case law precedent on infringement of trademarks.

In a competitive economy imitating or copying something that is in the public domain is essential.  Legally protected intellectual property rights, such as trademarks, are the exceptions to the freedom to copy and imitate.  In the absence of a legally defined exclusive right and without unethical behavior or illegality present, copying is permitted and encouraged, and will not be considered unfair competition.  Further, it is consumer confusion (or likelihood of confusion the marketplace), not imitation or copying, that creates liability for trademark unfair competition.

Our Charleston trademark attorneys handle cases in state and federal courts throughout Illinois, including Cook, DuPage, Kane and Will Counties.  For additional information about our trademark unfair competition lawyers and to discuss your unfair competition or deceptive trade practices case, please contact one of our Chicago business litigators at 312-789-5676.